Potato varieties commercially available with Globodera pallida resistance typically have round tubers making them unsuitable for western U.S. producers, where the focus is on long tuber shape and russet skin. Hybridizations have been conducted between Globodera-resistant breeding clones and varieties to russet-skinned breeding clones and varieties suitable for production in the western U.S. Sources of Globodera resistance being utilized in hybridization efforts, the use of marker assisted selection, and progress in developing russet-skinned germplasm having long tuber shape with resistance to the three Globodera species are described. 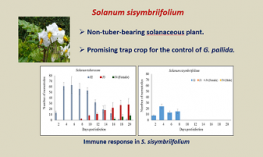 Developing Potatoes with Board Spectrum Resistance to Globodera