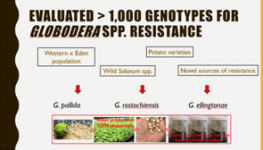 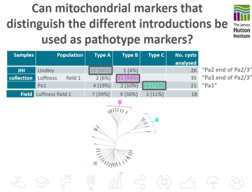 Can mitochondrial markers that distinguish the different introductions be used as pathotype markers? 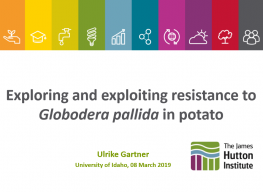 Exploring and exploiting resistance to Globodera pallida in potato

To achieve the most effective and durable resistance to G. pallida for potatoes in the UK market, knowing which G. pallida pathotypes are present in UK fields, their distribution, and how they behave in respect to virulence against resistant potato cultivars is important. Therefore, single cyst lines of UK G. pallida populations were generated, they were characterised phenotypically using six potato cultivars/breeding clones with different levels of resistance, mitotypically using a mitochondrial marker to distinguish between the three introductions of G. pallida to Europe, and more recently by GBS (genotyping by sequencing). Combining phenotypic and genotypic information we intend to develop robust molecular markers which can distinguish between the different virulence types of G. pallida.

PDF   Presented by Ulrike Gratner, The James Hutton Institute, at the University of Idaho, March 2018 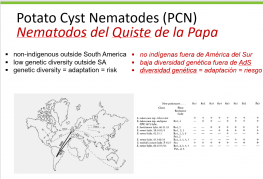 Study of enzymes found in Globodera pallida that protect it from the plant defense response and might provide insights into possible novel control methods for this pest.

A virulent pathotype, Ro2, has emerged which threatens the success of Globodera rostochiensis control due to the lack of commercially-acceptable resistant cultivars that can be planted on Ro2-invested fields. Cultivars resistant to Ro2 are urgently needed in New York nematode control program. Work to identify novel resistance against PCN, drawing on the U.S. Potato Genebank's collection of wild potato species, is discussed.