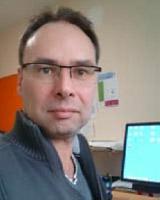 Nemotologist Eric Grenier, with the National Institute of Agricultural Research (INRA), serves as Co-Investigator on the GLOBAL Project.

Dr. Grenier leads the nematology group of the INRA in Rennes, France.  His research focus is on the effectors of potato cyst nematodes with an emphasis on genetic variability in nematode populations in relation to selection pressures imposed by resistance.  His ongoing studies include (1) the characterization of the genetic diversity and gene flows in cyst nematode populations with a special emphasis on the importance of human activities, (2) the identification and characterization of pathogenicity genes and especially those that are implicated in virulence and adaptation to plant resistances, (3) the study of the influence of agricultural practices, soil composition and intra-species genetic diversity in assemblies and community stability. Dr. Grenier received a PhD in entomopathogenic nematodes from the INRA of Antibes, France.