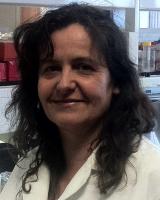 Ulrike Gartner joined the GLOBAL Project in May 2016. Her PhD project focuses on mapping and cloning of resistance genes in Solanum tuberosum clone 12601ab1 to the potato cyst nematode species Globodera pallida.

Ulrike is originally from Austria and she received her MSc in Chemistry from the University of Vienna. While in Munich, Germany, she had her own company specializing in translating scientific patents from English to German and German to English. Since 2004 she has been living in Dundee, UK, where she worked as Research Assistant at the University of Dundee, working on Asthma and COPD studies, and on rare monogenic skin diseases. Ulrike joined the nematology group at The James Hutton Institute in 2014, where she is involved in characterizing G. pallida populations in the UK.