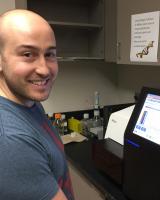 Pierre-Yves Véronneau joined the Saint-Jean-sur-Richelieu Research and Development Center nematology’s team at Agriculture and Agri-Food Canada in January 2012. He works with Dr. Benjamin Mimee to identify genomic and biomolecular approaches to address issues related to host/nematodes relations and population genetics. For the GLOBAL project, he is responsible of DNA extraction from Globodera spp. samples, sequencing and post-sequencing bioinformatics analyses. Pierre-Yves is involved in several sub-projects such as the development of a genotyping by sequencing pipeline for population genetics analysis, transcriptomic analyses, and the comparison of virulence genes from the different species. He received a bachelor degree in Biology from the University of Sherbrooke, Quebec Province, in 2009.