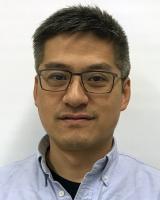 Huijun obtained a BS in Microbiology from the Wuhan University in China in 1994, a MS in Microbiology from the Huazhong Agricultural University in 1997, and a PhD in Plant Molecular Genetics from Shanghai Institute for Plant Physiology and Ecology, Chinese Academy of Sciences in 2001.  His previous research experience covered plant molecular biology, plant physiology, and plant pathology.